The Periotest is the instrument most commonly used for measuring osseointegration in dental implants. It is also available as a hand-held mobile device, known as the Periotest M. Now it is even simpler to perform an objective evaluation of an implant’s stability.

Thanks to its wireless design, the user can now benefit from a maximum freedom of movement. It is no longer necessary to provide a surface for apparatus in the vicinity of the patient. The device’s internal lithium-ion battery is simply recharged in the base unit provided, just like a cordless phone. What many implantologists are looking for is a simple and quick method of gaining an objective statement as to whether the implants they have made have become well osseointegrated and can be loaded. With the Periotest M, we have developed a device that is able to fulfil these requirements, and which can be seamlessly incorporated in the workflow of any dental practice.

The basic concept of the Periotest M is impressive because of its simplicity: the device is activated by a single switch and the measuring sequence begins forthwith. The test results are shown on the instrument’s integral display. The new model retains the strengths of the traditional Periotest measuring procedure, particularly its suitability for use in universal applications: the instrument can be used for taking measurements on a wide variety of implants, without the need for any special accessories, such as a transmitter or similar device. The Periotest is clearly a very economical measuring instrument.

The proven yet comfortable desktop unit

The Periotest classic stands for clear design and user -friendliness and is equally suitable for implantologists as well as for periodontists, orthodontists, oral maxillofacial surgeons and the outstanding dentist. The hand piece is very slender, fits well in the hand and can be positioned with ease. The Periotest classic has a large illuminated display showing the measuring results as integral values (=Periotest values). A voice output is provided simultaneously to the measuring result display. This means dentists do not have to turn away from their patients. The measuring values are also audible for the patient. This keeps the dentist and patient aware of the success of the therapy. Four different languages are available (German, English, French, Spanish), these being selected via the menu.

The Periotest classic unit comes with chargeable NiCd batteries. These can work independently of the power supply. A charge level indicator lets you know how much battery voltage is left. A charging device is included in the scope of supply.

The SOPROCARE concept was developed to assist the dental professional during prophylaxis and periodontal treatment in the dental office.

In addition, SOPROCARE is the first product on the market to reveal gingival inflammation.

In DAYLIGHT mode, SOPROCARE can also be used as a camera, providing all of the necessary tools to perform a complete and time efficient oral examination.

Due to the wavelength emitted by the LED lights of SOPROCARE®, the new plaque is highlighted by its white and grainy characteristicand old plaque is revealed a shade of yellow and orange.

Enamo-dentinal caries are clearly revealed by the bright red colour in the CARIO mode. Other surrounding tissue is displayed in black and white, thus focusing on the carious lesions.

A preset focus ring replaces the inconvenience of autofocus and provides sharp images without delay, regardless of the object or the distance.

In white light, from Portrait to Macro, SOPROLIFE produces unequalled quality of image. This mode not only enables you to communicate more effectively with your patients, but also gives you the ability to see details which are invisible to the naked eye.

SOPROLIFE is more accurate in identifying the development of occlusal and/or proximal carious lesions. This mode can help speed up the decision making process in treatment planning and enables safer options for the patients without ionizing radiation.

Clinical performance is enhanced as SOPROLIFE enables you to visually differentiate between infected and healthy tissue in the excavated site.

In dentistry, many daily procedures require loupes or a microscope together with a mirror to observe the areas requiring treatment. SOPRO 717 First allows you to go beyond the limits of human vision without any additional equipment.

A SUCCESS FROM ANY POINT OF VIEW

SOPRO 717 First’s great depth of field means you obtain a sharp image in seconds no matter which mode is chosen. Perfect illumination is achieved with eight LEDs.

Macrovision is the major advantage offered by the SOPRO 717 First: it extends way beyond the limitations of the human eye, giving a magnified view of up to 115 times. One simple procedure, and the infinitely small appears before your eyes! 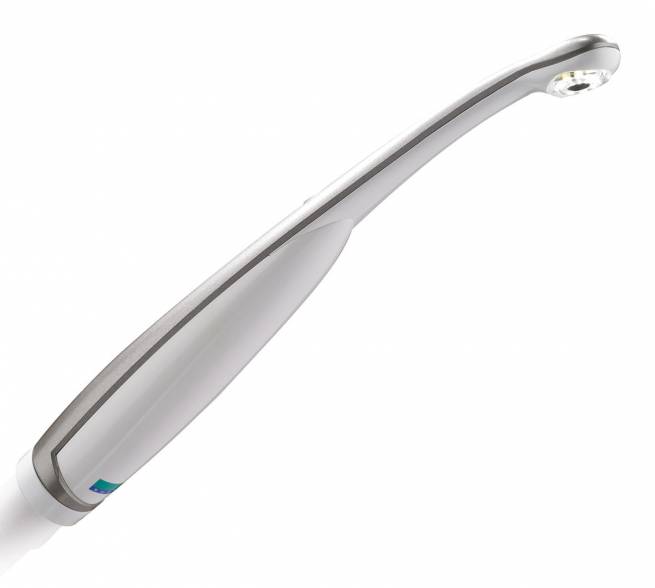 The SOPRO 617 camera is now a worldwide standard for dentists who demand SOPRO image quality. Its Color Line has been designed to efficiently light up your working environment.

The SOPRO 617 intraoral camera offers a 105° view for improved exploration of the distal areas. Its rounded shape and the thinness of the distal part make it more comfortable in the mouth.

SOPRO 617 is equipped with an aspheric lens which avoids distortion and provides a high quality image. No adjustment is necessary to obtain a perfectly clear picture.

Fix the image on the screen simply by touching the touch-sensitive SOPROTOUCH.