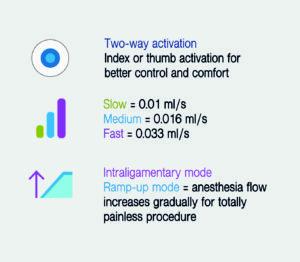 The Implantmed drive unit has been specially designed for use in dental implantology.

Implantmed gives you the tools for oral surgical procedures in the fields of implantology and maxillofacial surgery with maximum precision.

Your reliable partner in implantology

Implantmed excels by virtue of its ease of operation, powerful motor and automatic thread cutter function.

The logically designed operating concept supports implantologists and ensures all programs can be set up easily, by pressing the buttons on the unit or by operating the foot control.

In addition to the expert knowledge of the surgeon, the drive unit is also a pivotal factor in the uccess of a surgical procedure. Just one operating stage for setting all necessary parameters. The six most important recurring operational procedures can be saved as individual programs. Elcomed from W&H is a high-quality innovative solution for maxillofacial surgery, dental surgery and implantology.

Piezomed puts all the advantages of innovative ultrasound technology at your fingertips: High-frequency microvibrations allow cutting with incredible precision. In addition, with the so-called cavitation effect you can also ensure an almost blood-free surgical site.

Piezomed facilitates the surgeon’s and implantologist’s work: thanks to innovative ultrasound technology, only bone substance is resected with high precision. The surrounding soft tissue remains uninjured. A noticeable relief for the patient: less pain, quicker healing!

For both patient and practitioner with secure and effortless cut, better tactile sense and reduced post-operative pain.

With the NEWTRON® LED handpiece, get access to over 80 different dental care tips, with exclusive designs, alloys and coatings.

Experience power and simplicity in ultrasonic bone surgery Piezotome® solo, the best of acteon® technology in a compact device.
It integrates the most powerful, reliable and safe components dedicated to ultrasonic pre-implant surgery.

For both patient and practitioner with secure and effortless cut, better tactile sense and reduced post-operative pain.

With the newtron® led handpiece, get access to over 80 different dental care tips, with exclusive designs, alloys and coatings.

MD 30, powerful and sturdy but intelligent and gentle.

The new MD 30 implantology motor system is the convincing result of 40 years of research and development in the field of implantology. An outstanding solution, absolutely in line with our philosophy of providing implantologists across the world with complete systems that leave nothing to be desired. This unique motor system, consisting of the housing, electronic motor, footswitch and irrigation pump, offers two motor connections, making work considerably simpler and more efficient.

10 stored programs for each of the two motors ensure smooth running during the procedure. The optimized control of the motors allows you to accomplish your tasks individually with the highest possible precision, also with contra angles equipped with LED, thus guaranteeing safety and trust with every treatment.

Edges and grooves are avoided for easy cleaning of the device. The pump chamber is designed such that any liquid entering passes straight out of the housing. This is an important contribution to safety and may not be underestimated, before, during and after each use.

An Implant Motor System capable of perfectly accomplishing any step of procedure, due to it’s sophisticated motor management for smooth and precise power.

The new MD 11 Implant Motor together with its bigger brother, the MD 30, are developed with the intention to put extra smoothness into your hands. The further development of its electronic motor and a sophisticated motor control are key players in this new generation of Nouvag motor systems.

This reflects also the new design with smooth edges for easy cleaning and a display that gives you all the information at a glance. Single function keys with haptic and audible feedback guarantee for accurate device setup.

Inserting and changing of tube sets is carried out effortlessly by a front access push button and tube compartment. The tube bracket swings open and gives good view to the tube seat and the two notches to fix the tube in.

A broad variety of extensions and accessories is provided by Nouvag AG and can anytime be added.

The Periotest is the instrument most commonly used for measuring osseointegration in dental implants. It is also available as a hand-held mobile device, known as the Periotest M. Now it is even simpler to perform an objective evaluation of an implant’s stability.

Thanks to its wireless design, the user can now benefit from a maximum freedom of movement. It is no longer necessary to provide a surface for apparatus in the vicinity of the patient. The device’s internal lithium-ion battery is simply recharged in the base unit provided, just like a cordless phone. What many implantologists are looking for is a simple and quick method of gaining an objective statement as to whether the implants they have made have become well osseointegrated and can be loaded. With the Periotest M, we have developed a device that is able to fulfil these requirements, and which can be seamlessly incorporated in the workflow of any dental practice.

The basic concept of the Periotest M is impressive because of its simplicity: the device is activated by a single switch and the measuring sequence begins forthwith. The test results are shown on the instrument’s integral display. The new model retains the strengths of the traditional Periotest measuring procedure, particularly its suitability for use in universal applications: the instrument can be used for taking measurements on a wide variety of implants, without the need for any special accessories, such as a transmitter or similar device. The Periotest is clearly a very economical measuring instrument.

The proven yet comfortable desktop unit

The Periotest classic stands for clear design and user -friendliness and is equally suitable for implantologists as well as for periodontists, orthodontists, oral maxillofacial surgeons and the outstanding dentist. The hand piece is very slender, fits well in the hand and can be positioned with ease. The Periotest classic has a large illuminated display showing the measuring results as integral values (=Periotest values). A voice output is provided simultaneously to the measuring result display. This means dentists do not have to turn away from their patients. The measuring values are also audible for the patient. This keeps the dentist and patient aware of the success of the therapy. Four different languages are available (German, English, French, Spanish), these being selected via the menu.

The Periotest classic unit comes with chargeable NiCd batteries. These can work independently of the power supply. A charge level indicator lets you know how much battery voltage is left. A charging device is included in the scope of supply.